How are Strategy Tester Report values calculated and what do they mean?

This tab displays all available performance metrics for the strategy including Net Profit, Gross Profit, Max Drawdown and more. It looks like this:

Net ProfitThe overall profit or loss (in the selected currency) achieved by the trading strategy in the test period. The value is the sum of all values from the Profit column (on the List of Trades tab), taking into account the sign.

Gross ProfitThe total profit for all profitable trades generated by a strategy.

Gross LossThe total losses for all losing trades generated by a strategy. Analyzing and reducing trade losses is an extremely important part of trading strategy analysis. That’s why this characteristic of a strategy is the most important. It should be noted that net profit increases not only when gross profit improves, but also when gross loss is reduced.

Max DrawdownDisplays the greatest loss drawdown, i.e. the greatest possible loss the strategy had during its run compared to its highest profits. To calculate the Max Drawdown that is displayed in the Overview tab in the Strategy Tester, we:

1. Calculate resulting Equity after each trade that the strategy closes, at the bar where it closed.

2. For each separate trade, calculate Max Equity at the time the trade closed. To do so, we take the strategy's Initial Capital and all of the Equity values from the trades that were already closed at that point and find the largest number among these values.

3. For each trade, calculate its own Drawdown. This is done by taking the trade's Max Equity (found in Step 2) and subtracting its current Equity (Step 1).

4. Take individual Drawdowns of all trades (Step 3) and find the largest number among them.

Starting Equity (i.e. the funds available to the strategy) is always equal to Initial Capital. In our case, it is 100000.

After that, we go long at 35.97 and then turn the position at around 44.28. The precise numbers are not important for us because this trade is actually profitable, thus it increases Equity. Max Drawdown still stays equal to 17357.08 because it is calculated based on peaks and troughs of Equity, and on this particular trade, our Equity is not at all time low.

The percentage and absolute values of a drawdown are two different metrics. They are tracked independently. For example, let’s say the initial capital is $100. After a series of losing trades, equity decreases to $50. The drawdown amounts to $50 in absolute terms and 50% in relative terms. Later, after a series of profitable trades, equity increases to $300 and then drops to $200. In this case, the absolute drawdown will be $100, and the relative drawdown, 33%. The overall maximum absolute drawdown of the strategy will be $100, and the maximum relative drawdown will be 50%.

Buy & Hold ReturnThe return achieved if all funds (Initial Capital) were used to buy the security when the first trade is entered, and the position was held for the duration of the test period.

Sharpe RatioNobel Laureate, William Sharpe, introduced the Sharpe Ratio in 1966 under the name “reward-to-variability ratio”. The Sharpe Ratio is widely used by portfolio managers and individual traders to show how much risk was taken to achieve specific returns. The formula for the Sharpe ratio is SR = (MR - RFR) / SD, where MR is the average return for a period (monthly for a trading period of 3 or more months or daily for a trading period of 3 or more days), and RFR is the risk-free rate of return (by default, 2% annually). SD is the standard deviation of returns. Thus, this formula yields a value that could be loosely defined as return per unit risked if we accept the premise that variability is risk. The higher Sharpe ratio, the smoother the equity curve. Having a smooth equity curve is an important objective for many traders.

Sortino RatioThe Sortino ratio is a variation of the Sharpe ratio. Unlike the Sharpe ratio, its calculation is done using the standard deviation of the downside risk, rather than that of the entire (upside + downside) risk. Due to this, it is thought to give a better view of a portfolio's risk-adjusted performance because positive volatility is considered a benefit.

Profit FactorThe amount of money a trading strategy made for every unit of money it lost (in the selected currency). This value is calculated by dividing gross profits by gross losses.

Max Contracts HeldThe maximum number of contracts held at any one time.

Open PLThe profit or loss for the current open position. If no position is open, the value returned is N/A.

Commission PaidThe sum (in the selected currency) of commission paid. Slippage is not included.

Avg TradeThe sum of money gained or lost by the average trade generated by a strategy. Calculated by dividing the Net Profit by the overall number of closed trades. An important value since it must be large enough to cover the commission and slippage costs of trading the strategy and still bring a profit.

Avg Win TradeThe Gross Profit divided by the number of Winning Trades generated by a strategy.

Avg Loss TradeThe Gross Loss divided by the number of Losing Trades generated by a strategy.

Ratio Avg Win / Avg LossThe average value of how many currency units you win for every unit you lose (in the selected currency). This is calculated by dividing the average winning trade by the average losing trade. This field is not a very meaningful value by itself because it does not take into account the ratio of the number of winning vs losing trades, and strategies can have different approaches to profitability. A strategy may trade at every possibility in order to capture many small profits, yet have an average losing trade greater than the average winning trade. The higher this value is, the better, but it should be considered together with the percentage of winning trades and the net profit.

Largest Win TradeThe most profitable trade in the test period.

Largest Losing TradeThe most losing trade in the test period.

Avg # Bars in TradesThe average number of bars that elapsed during trades for all closed trades.

Avg # Bars in Winning TradesThe average number of bars that elapsed during trades for all winning trades.

Avg # Bars in Losing TradesThe average number of bars that elapsed during trades for all losing trades.

This tab provides key performance metrics for the strategy. 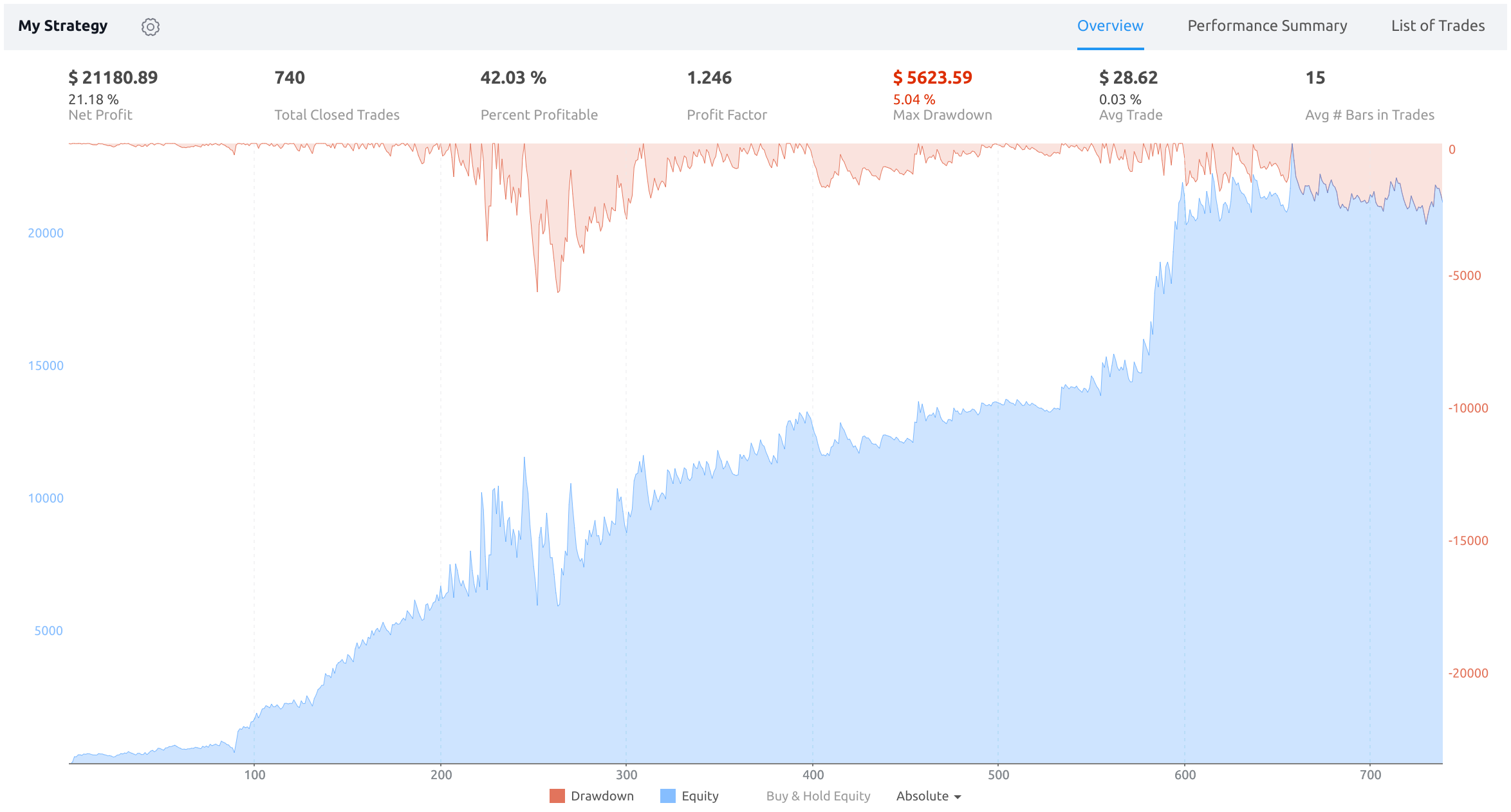 At the top of the tab are the metrics of the same name from the Performance Summary tab. The following charts are located in the center:

DrawdownThis chart illustrates each trade's drawdown vs. trade number for all closed trades.

EquityThis chart displays the equity (in the selected currency) vs. trade number for all closed trades. The equity curve line chart presents trading performance on a trade-by-trade basis. This all-purpose equity chart is best used for general analysis of trading performance.

B&H This chart displays the return achieved if all funds (Initial Capital) were used to buy the security when the first trade is entered, and the position was held for the duration of the test period. You can hide/show chart elements by clicking on their corresponding button at the bottom of the tab.

This tab displays detailed information on each trade.

A trade is a pair of orders: an entry order and an exit order. Trades are arranged chronologically by execution of entry orders. The earliest trade is at the very top of the list.

Trade # Contains the sequential number of the trade.

Type The direction of the trade (long or short).

Date/Time The transaction time in the chart's time zone.

Contracts The number of units bought or sold.

Profit The profit per trade and the gain/loss percentage of that trade.

Cumulative Profit The cumulative profits or losses of the strategy after closing the trade. The percentage displays the relative gain/loss of the last trade as compared to the equity (initial capital + cumulative profit) before that trade.

Run-up The maximum possible profit of the trade according to the strategy, as well as the maximum percentage gain.

Drawdown The maximum possible loss of the trade according to the strategy, as well as the maximum percentage loss.

Let's look at how the values for the Profit, Cumulative Profit, RunUp, and Drawdown columns are calculated: 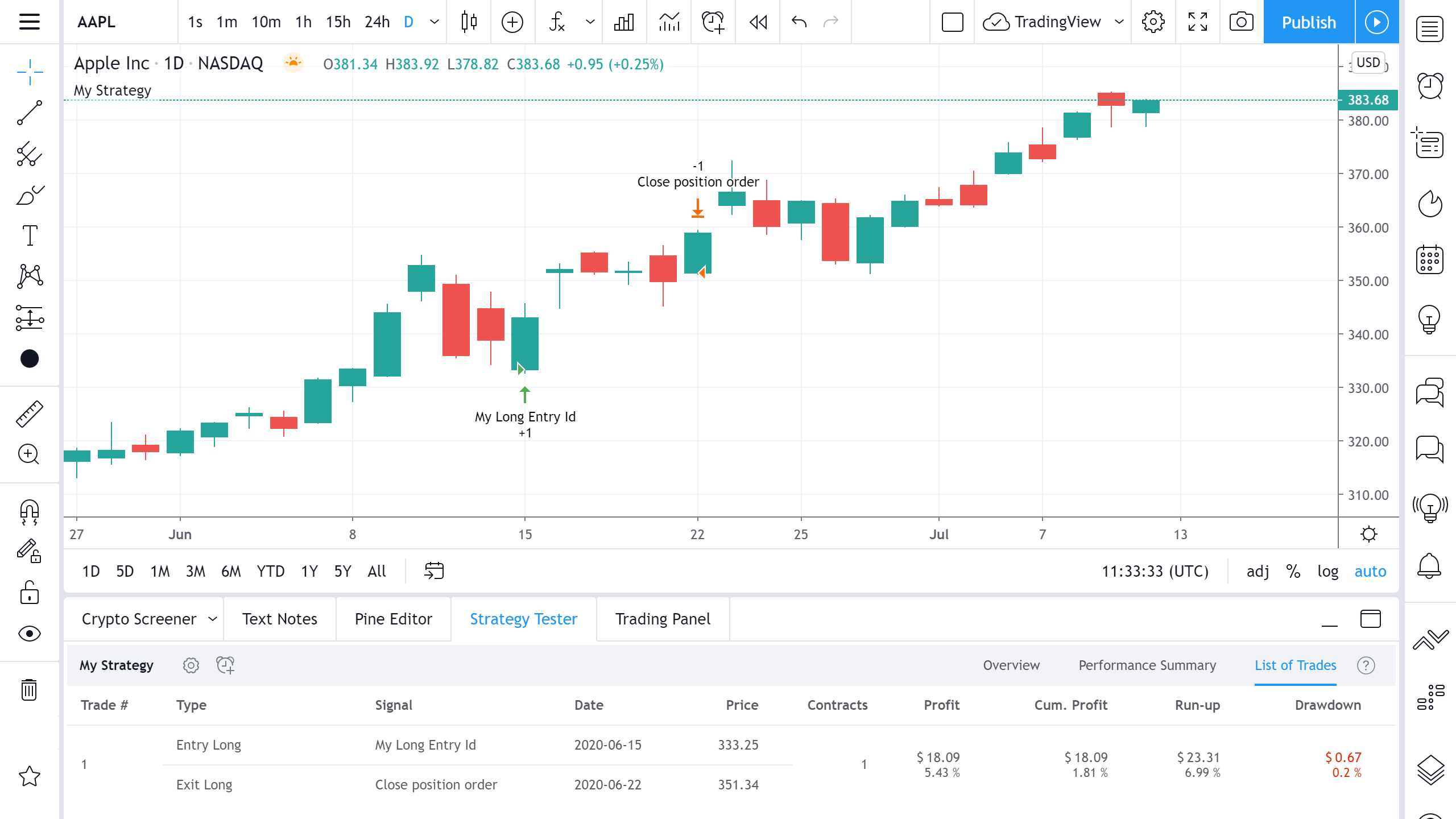